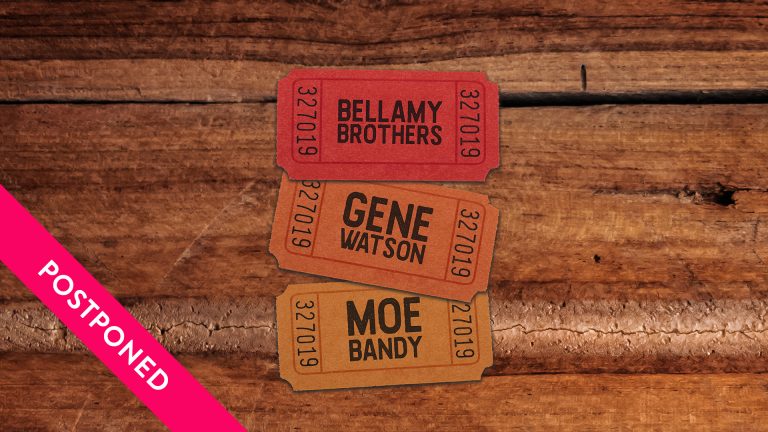 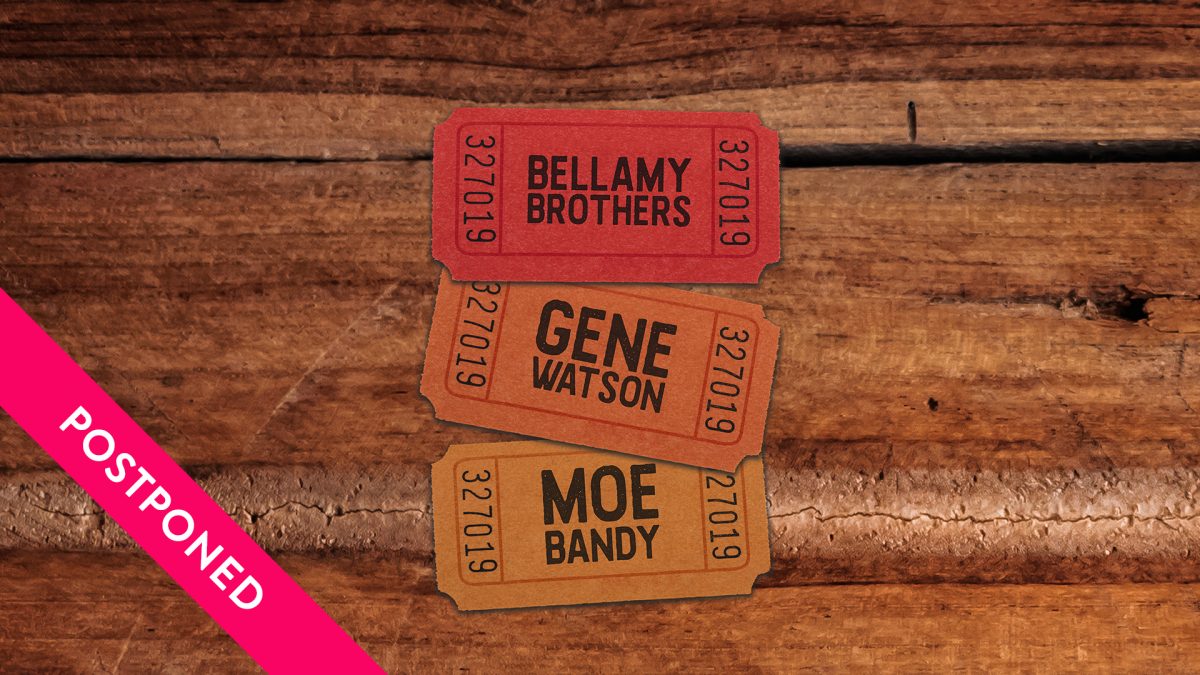 One night for country gold.

The Bellamy Brothers, Gene Watson and Moe Bandy show has been postponed. A rescheduled date will be announced at a later date. Tickets purchased for the show will be honored on the new date. For more information about refunds, ​click ​here.

Howard and David continue to prove that the trail they’ve ridden to fame has been as unique as their music itself—music that is now celebrating 40 years of success.

The road that started on the pop music charts in the ‘70s, took a winding turn into country music in the ‘80s, paving the way for duos to come, such as Brooks & Dunn, Montgomery Gentry, Big & Rich, and previously—The Judds. But before the road forked into country, the musical odyssey of brothers Bellamy started creatively smoldering in their home state of Florida, before exploding nationally amidst the ’70s pop music culture of L.A.

The brothers first official gig was in 1968, playing a free show with their father at the Rattlesnake Roundup in San Antonio, Fla. They honed their early skills playing black clubs throughout the south, and singing backup for artists such as Percy Sledge, Eddie Floyd, and Little Anthony & The Imperials. Within a few months, the brothers moved north, immersing themselves and their rock/country sound in the Atlanta market, where the Allman Brothers were the emerging kings of the music world.

With the dawning of the Age of Aquarius on the horizon, and America embroiled in a smoke haze of drugs, civil unrest and an unpopular war, The Bellamy’s music picked-up the hard driving edge that bespoke the times. Songwriting had become David Bellamy’s drug of choice during the long road gigs he and Howard were regularly pulling bodies and equipment to and from. It was his songwriting that was posed to soon provide the duo a national breakout.

The break came in the form of the hit, “Spiders & Snakes,” written by David and recorded by Jim Stafford. The song became a smash, eventually selling more than three million units worldwide. It became the catapult that rocketed the brother onto the L.A. music scene. Young and impressionable, Howard and David fell into the musical circle of the greats of the day: Bob Dylan, James Taylor, and Van Morrison, as well as West Coast based country rockers like Poco and the Byrds.

It was a creative shoe that fit.

Now known by their music and the company they were keeping, The Bellamys officially lifted off the launch pad in 1976 when their single, “Let Your Love Flow,” became an instant smash in both the U.S. and Europe. It stayed on the international charts long enough to build a huge international fan base for the hip young brothers that endures to this day. In Germany alone it perched at No. 1 for more than two months. The love was indeed flowing as The Bellamys jammed for audiences on their sold-out concerts and shared stages with the likes of Loggins & Messina, the Doobie Brothers and the Beach Boys, with their patented blend of rock/country music.

True to their musical roots, their style and their songwriting was moving steadily more towards their raising. By the late ‘70s The Bellamys were emerging on the country charts with another bona fide smash. “If I Said You Had A Beautiful Body (Would You Hold It Against Me),” originally scrawled on a dinner napkin by David, rocketed them to the top of the country charts the way “Let Your Love Flow,” had done in the pop market just a few years earlier. It proved to be the first of a string of 14 No. 1 singles in the U.S. alone.

Success followed success: “Dancing Cowboys,” “Sugar Daddy,” “You Ain’t Just Whistlin’ Dixie,” “Lovers Live Longer,” “Do You Love As Good As You Look,” “Redneck Girl,” “For All The Wrong Reasons,” “I Love Her Mind,” “I Need More Of You,” “Old Hippie,” “Too Much Is Not Enough,” “Kids Of The Baby Boom,” and “Reggae Cowboy” and “Crazy From The Heart,”… all have lined the corridors of the Bellamy’s musical history and their walls with platinum and gold.

Along the way, Howard and David created a patent on the newly cool “duo” category in country music. In the era of the 2000s, The Bellamy Brothers hold the record in both the Academy of Country Music (ACM) and the Country Music Association Awards (CMA) for the most duo nominations. Numerous Grammy nods have also been directed toward the brothers.

Internationally, the story has been the same—though the titles may be different. The Bellamys have released more than two-dozen hit songs outside the U.S. that were never released here. With a sharp eye on the songwriting skills that have been the bedrock of their success, Howard and David concur that their career is unique in their international finesse for matching their songs to the market.

“For the international releases, you have to have a strong melody,” notes David. “The lyric is very important, but internationally the melody is something fans can lock into, even if they can’t understand the lyrics.” Howard and David continue to perform and film TV specials in Europe and around the world.

These days when the subject turns to touring, The Bellamys are showing a new generation of country music how it’s done. “We’re old road dogs,” grins Howard when asked about the motivation behind the brothers 200 plus concert dates each year. Adds David: “Our live draw is bigger than it was in the ‘80s. I think the same people that grew up with us and with our music in the ‘60’s and ‘70’s obviously have raised a whole new generation of Bellamy fans who started toddling to our music. Now they’re turning up at our concerts as college kids, who are really turned on and tuned in to us and our music. … it’s a great feeling.”

On the infrequent off days from the road, Howard and David head the bus back to their 150-acre family ranch in Darby, Florida just north of Tampa. A working ranch, the spread consists of Purebred Charlois cattle and quarter horses. Amid a land lush with fruit trees, ancient oaks and crepe myrtles, three generation of the Bellamy family, headed by David and Howard’s mother, Frances, populate the homes clustered in the family compound.

The Bellamy Brothers latest project is their new album titled ’40 Years’ is an ambitious project that celebrates their career with 20 of their biggest hits and then adds 20 brand new songs in this two-CD anniversary collection.

This masterful country stylist from Houston, Texas, has been thrilling audiences for more than 50 years. Gene’s very first radio single, the self-penned “If It’s That Easy” was released in 1962 so the entertainer is celebrating his 50 Years in the music business, a “Golden Anniversary” in 2012.
Although the song didn’t make any radio charts, it did start the career of the man now known as “The Singer’s Singer.” Gene Watson’s tally of 75 charted titles, 23 top-10 hits and 6 NO. 1 records has led to membership in the Texas Country Music Hall of Fame. Radio listeners are still transfixed whenever classics like “Farewell Party,” “Fourteen Carat Mind” or “Love in the Hot Afternoon” are played. The depth of emotion in his singing, his brilliant phrasing, his jaw-dropping range and the power in the lyrics he chooses are all factors in the awe he inspires in both fans and his musical peers.

At an age when most people are contemplating retirement, Gene Watson is still making some of the greatest records of his life, receiving such accolades as Album of the Year and even Album of the Decade from journalists around the world. Watson earned the title of 2010 Country Music Legend of the Year, from Citadel Media’s Real Country Radio Network nationwide fan vote.

Watson is one of the rare singers who still sings in the same key as he did 30 years ago and his audiences respond with standing ovations night after night when he nails the octave jumping last note on his most requested song, the now country classic “Farewell Party.” As Rodney Crowell so aptly stated, “Just when I think Country Music is a lost art form, something by Gene Watson catches my ear and I can breathe again.”

Considered one of the finest pure-country singers of his generation Watson offers up one of the best traditional country shows in the business. His stunning voice captivates audiences and keeps his fans coming back again and again.

Moe’s long string of hits include “Bandy the Rodeo Clown”, “Hank Williams, You Wrote My Life”, “Till I’m Too Old To Die young”, “Americana”, “It’s A Cheatin’ Situation”, “Just good Ol’ Boys”, “Barstool Mountain”, “I Cheated Me Right Out of You”, “I Just Started Hatin’ Cheatin’ Songs Today”, “Rodeo Romeo”, “You Haven’t Heard the Last of Me”, “Holding The Bag” And dozens of other chart-toppers. Whether writing, recording new songs or travelling the world performing. Moe keeps one of the busiest schedules in show business. Some of his noteworthy accomplishments are: 10 No. 1 hits, 40 top 10 Hits, 66 chart hits, 5 gold albums, ACM Song of the Year, ACM most Promising Male Vocalist of the Year, American Video of the year, ACM and CMA Duet of the Year.

Country music legend Moe Bandy has come a long way from his bull riding days in Texas. Not to mention his years as a sheet metal worker by day and playing honkey tonks at night in and around his hometown of San Antonio, Texas. In the mid-70s when the country pop Kenny Rogers, John Denver and the outlaw sound of Waylon and Willie was at the rage, along came the traditionalist Moe Bandy.

The Texas singer with twin fiddles and steel guitar in the band kept Texas-style honkey tonk music alive, but it wasn’t easy. In 1972 Moe met record producer Ray Baker on a hunting trip and convinced him to listen to some demo tapes he had made. Baker agreed to produce Moe if he was willing to pay for recording session. Moe agreed and out of that session came Moe’s first hit song “I just Started Hatin Cheatin’ Songs Today.” GRC records picked up the song and released it nationally where it became a top 20 hit and that was just the beginning. Moe followed up with “It Was Always So Easy (To Find an Unhappy Woman)” and his first No. 1 hit “Bandy the Rodeo Clown.” His songs never strayed far from the traditionally honky tonk fare. Loving, cheating, drinking and patriotic songs formed the core of his music.

Moe continues to perform to packed houses all over the world. More than anything else Moe loves to perform for his countless fans.